1 DESCRIPTION OF THE PROPERTY
Land Registry Office and Mortgage Registry
1.1. Details
A complex located in the municipality of Rome (Via Massimi 158/164), this property is designated for use as office space and consists of two elevated multi-storey buildings. The buildings are of four and five (above ground) stories respectively, connected on the ground floor by a lower flat-roofed entrance building with a colonnaded porch. There are also two stories below street level, a large surrounding courtyard and a designated parking area. The site is located in Balduina, within the 19th Municipality of Rome. Balduina itself is surrounded by the areas of Trionfale-Monte Mario, Camilluccia, Medaglie D’Oro and Torrevecchia. Its proximity to the ‘Monte Mario nature reserve’ and ‘Insugherata nature reserve’ make this area in the Northwest of the city highly esteemed.
The area is predominantly residential, and is highly sought-after. It is characterised by relatively newly-built houses and apartment buildings, and is mainly populated by middle class people.

The location of the property being sold, in Via Massimi, may be considered secluded compared to other areas of Balduina, but is nonetheless strategic and desirable both in terms of surrounding infrastructure and links to the rest of the city (FM3 railway line – Balduina and Pineta Sacchetti-Gemelli stops; covered by various bus routes; close to the main access roads of Via Trionfale, Tangenziale Est, Cassia Nuova and Flaminia Nuova). 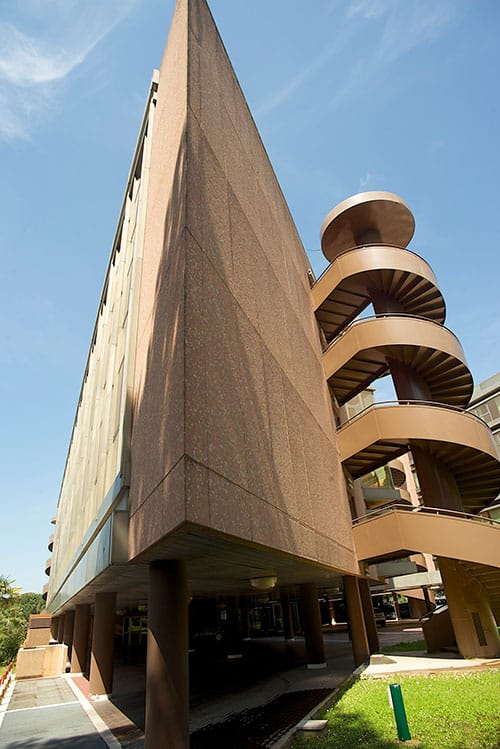 1.2. Features and state of repair of the building
The building complex for sale, which consists of offices, garage, associated car parking spaces and garden area was constructed at the end of the 1970s. In total, the complex was built on an area of 18,564 m2; the total effective area, including both covered and open spaces, is 18,771 m2 (value stated in the Gilardoni purchase by merger notary deed dated 23/12/82). The two elevated parts of the building, from here on in referred to as buildings A and B, have a rectangular-shaped floor plan and are arranged with their long sides parallel to each other. The buildings are constructed with a supporting structure made from iron and reinforced concrete, and the roof is flat. An identical construction process has been used for the ground floor section, which links and connects the whole complex. The curtain wall façade is made from prefabricated concrete panels with uninterrupted glazing on the main sides. The layout of the various different areas of the building is as follows:
– There is an ample communal ground floor atrium which, via adjoining horizontal link corridors, provides access to buildings A and B. The stairwells and the lift lobby area are well proportioned. On the ground floor, you also find the reception/security and video surveillance area, along with the canteen and kitchen, connections to other parts of the complex, an ample outside colonnade, the garden area and the access road with street-level parking.

– The first underground floor (S1), a large part of which looks out at ground level, is accessible via the stairwell as well as from the courtyard, with vehicle access. It includes a large area intended to be used as an ‘Electronic Data Processing’ zone, equipped with a raised floor, an area for offices (the above-ground section), archives and various store rooms.

foto medie02- Located on the second underground floor (S2), linked to the building via the stairwells and vehicle-accessible from the courtyard, is the garage. The garage is divided into sections, between each of which, for security reasons, there are metal sliding doors. Areas dedicated to building facilities for the whole complex are also present on this floor.

– The ‘top’ levels, which are above ground in both building A and building B (from the 1st to the 4th/5th floor), consist of designated office space, with the stairwells and lifts located within the confines of the buildings themselves.

– The open car park, located within the area belonging to the complex, includes parking spaces for both visitors and staff.

– The entrances are under video surveillance.

The following are found within the buildings themselves:

– Subdivisions: each floor of the two multi-story buildings is made up of two zones, which have symmetrical office layouts and a central connecting space between them (stairwells, lifts and landings). In the working areas, there is an ‘open plan’ layout in which prefabricated mobile panels can be used to create partitions between areas.

– False ceilings are present across all office levels, and are designed to contain the channels for the building facilities (floor to ceiling height, 3m). The ceilings are made from slats with built-in lighting fixtures.

– The floor is carpeted with ‘high-tech’ flooring in the working areas, with wiring to each workspace. The stairs (both tread and riser), landings and lift areas are paved with cement gravel tiles, such as in the entrance lobby and access area on the ground floor. The underground levels have different flooring depending on the function of the areas: industrial and cement gravel tiles, raised flooring made from inert materials (‘Electronic Data Processing’ zone and offices) and industrial cement flooring (garage).

– The walls are covered with plaster painted in neutral colours. In building B, on the 3rd floor where the managerial areas are located, there is a more luxurious and refined finish, with walls decked with wood.

– The toilets are completely decorated in majolica tiles, with shared taps and washbasins. In the managerial areas, the toilets have been finished to a high standard, with particular care paid to the type and quality of fittings.

– Some of the rooms are finished with panelled doors, painted a walnut shade and/or covered with laminate. On all floors, the entrances and partitions are made from metal and glass, equipped, for safety reasons, with emergency exit handles.

foto medie05- The external windows of the offices are double-glazed with an aluminium frame.

The utilities within the building are as follows:

– There is a piped climate control system mounted within the ceiling with peripheral vents in the floor in the office areas, with fan coil units in the managerial offices and radiators in the service areas. The air handling units are located within building A (no 2) and B (no 2) on the first (no 2) and second (no 1) underground floors. The supply for these units is from the central heating point on the second basement level, from two central refrigerators (in buildings A and B respectively) and a refrigeration unit on the second underground floor.

– Electrical system: electrical wiring runs from the central transformer (on the second underground floor) within cabling shafts to the electrical distribution units on each floor. The system is equipped with a generator, located in the basement, which protects against black-outs and provides an uninterruptable power supply (UPS) to the most important and sensitive areas (IT network, essential building services, security system).

– There is a pressure-based water and sanitation system, with pressure tanks for use in the event of a loss of pressure.

– The anti-fire system consists of portable fire extinguishers and hoses on the aboveground floors, smoke detectors on the first basement level and a sprinkler system on the second underground level (garage area).

– Lift system: there are six lifts, which have electric motor and cable systems. The walls are finished in aluminium and the lifts have automatic doors and dimensions in keeping with regulations. There is a hydraulic lift which connects the ground floor and the two underground levels.

– The lighting system in the office areas consists of lighting fixtures built into the ceiling with fluorescent bulbs.

– The anti-intruder and security system, covering the area around the buildings and extending to the surrounding fence, is provided by CCTV cameras linked to a control monitor.

– The building complex is wheelchair accessible.

Despite needing some updating and reconditioning, all of the systems in place comply with all applicable rules and regulations. The same applies for the European Economic Community rules and regulations regarding security (e.g. L. 626/’94, L.13/’89 and subsequent laws).

In general, both the level of finish and the state of repair of the communal spaces and office areas are good. They would be considered of average quality by today’s standards and in keeping with the period in which the building was constructed.

In fact, the building complex has always been occupied and used as offices (and, given it was released by the renting company after they had concluded their contract, has only recently been vacated and emptied) and is in the state expected of a rented property.

The new local strategic plan was adopted following decision by the City Council no 33/2003, and made definitive after meeting approval on 13/02/08. It includes the building complex in question, within the T3 area of twentieth-century speculative building development. The building complex was built in line with the following rules of law:
– Planning permission no 136, dated 1973, prot. 16494
– Transfer of the planning permission no 136, no 82 dated 1974, prot. 3487
– Licence to modify no 170, dated 1976
– Resulting certificate of habitability no 375, awarded on 17/12/79

Following the rule of law pertaining to the received documentation, it resulted that:
– Through the private deed dated 20/01/86 it has been established that the Compagnia Tirrena di Assicurazioni Ltd., and its legal predecessors, have right of way and right to use the car parking areas for employees and visitors, in the areas of Piccola Opera and Divina Provvidenza “Don Orione”, covering a total of 6,350 m2 (page 363, parts 190/p; 193; 194; 195; 129).

It is noted that, according to the certificate of habitability, the building is described as a set of distinct units designated as office space, as well as other rooms, garages and service areas.
Furthermore, in the Land Registry records (as has been already reported in Section 2.1 of this document) the offices are classified as individual property units under category A/10. The above is in keeping with the completion – in due course – of the “Centro Direzionale Massimi” by the homonymous owning company, who built it.

4 AREA OF THE PROPERTY AND ITS INTENDED USE
The total floor area and the intended use of the premises are taken from the provided computerized floor plans. 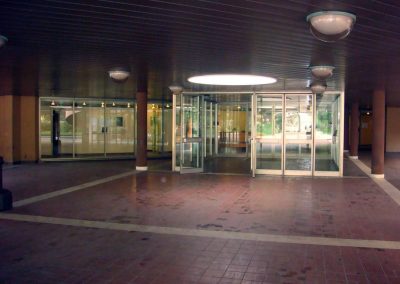 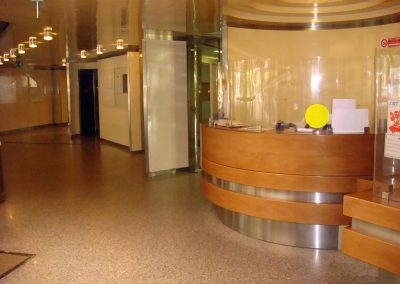 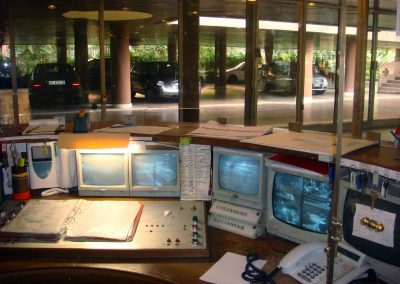 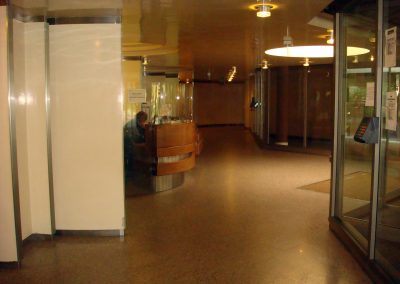 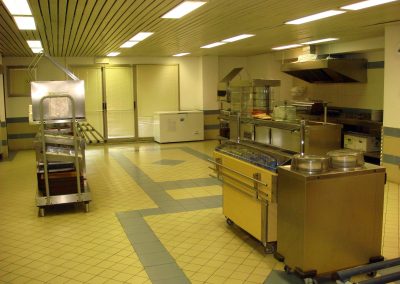 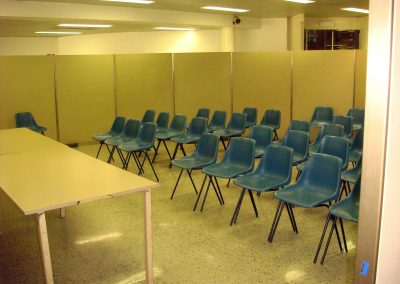 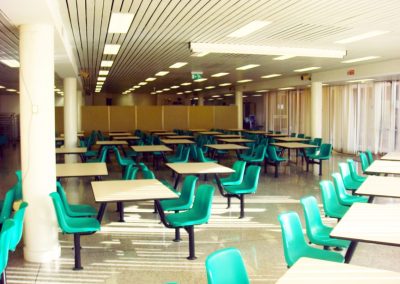 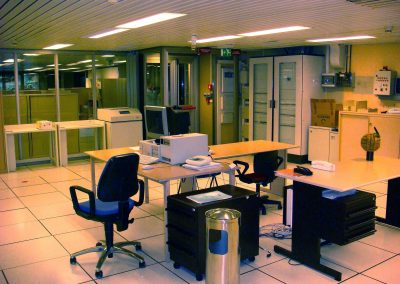 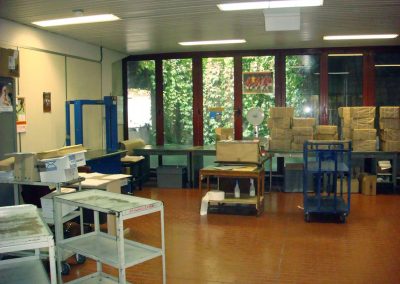 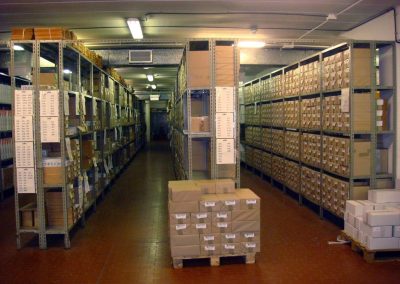 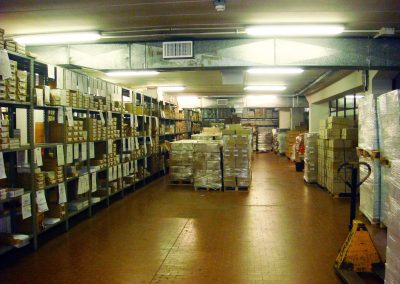 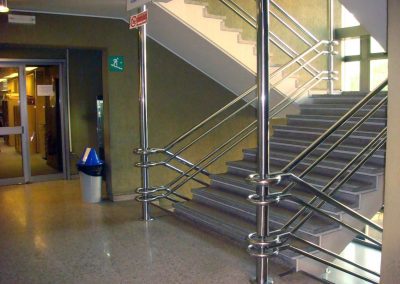 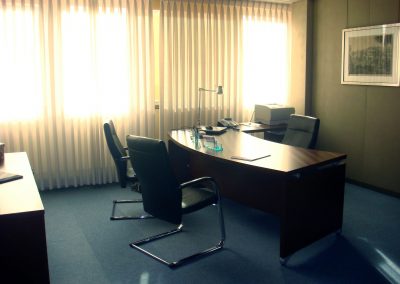 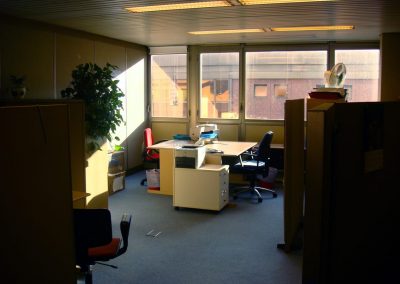 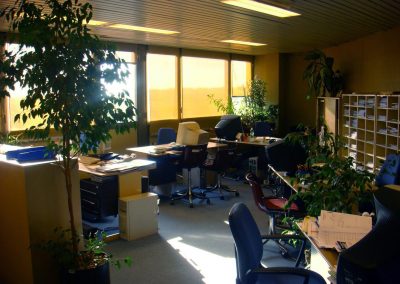 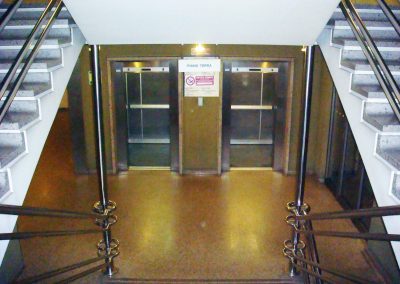 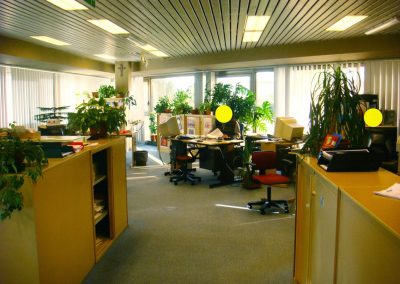 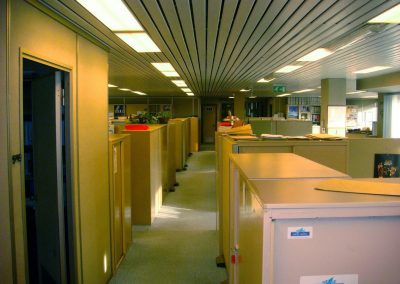 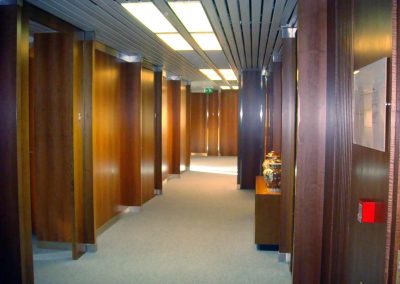 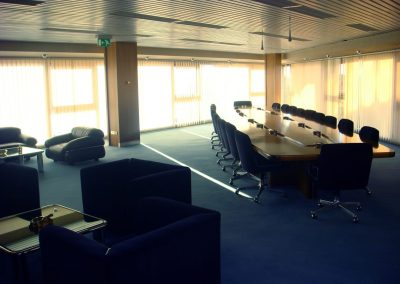 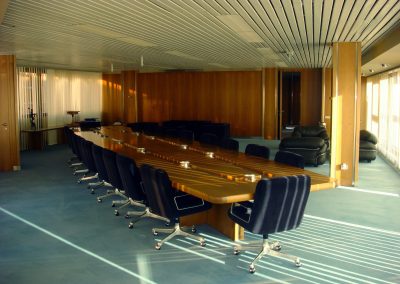 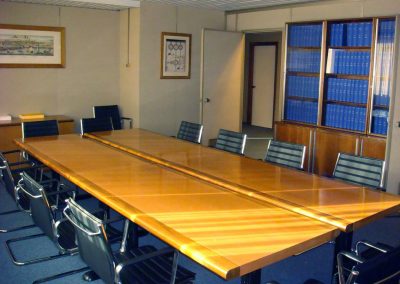 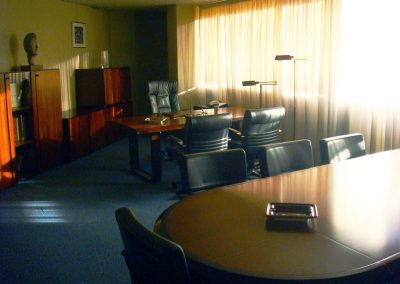 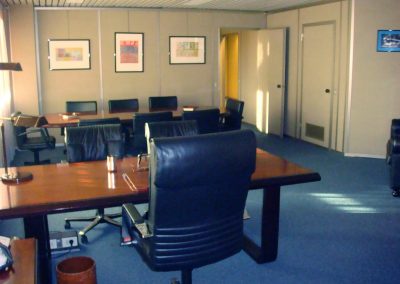